An Evening With Groucho - Single Episodes 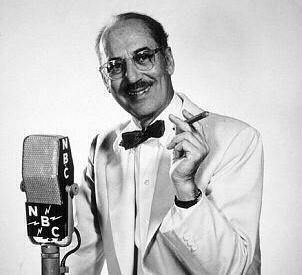 An Evening With Groucho - Single Episodes

AN EVENING WITH GROUCHO

An Evening with Groucho is a look at the life of Groucho Marx and the Marx Brothers, as told by Groucho.

Groucho was born Julius Henry Marx on October 2, 1890 in New York. He was the third of the five surviving sons of Sam and Minnie Marx. He was the first of the brothers to start stage career aged 15 in an act called The Leroy Trio. Other acts followed, but none of them was a great success. Twice the other members of the act disappeared overnight and left him penniless in a town far away from home.

When his brothers came on stage, they finally had a success with the musical comedy called I'll Say She Is. It was at one of the performances of this show that Groucho got his painted moustache. He arrived late at the theater and used greasepaint to create a moustache. He found this so much easier than a glued on moustache that he insisted on using this technique from then on.

I'll Say She Is was followed by two more Broadway hits -- The Cocoanuts and Animal Crackers. The latter of which has the character of Captain Spaulding which remained (with the song Hooray for Captain Spaulding) a trademark for Groucho for the rest of his life.

The Cocoanuts and Animal Crackers were also the first movies (except for one unreleased on) made by the Brothers and were filmed in New York. The remaining movies were made in Hollywood.

In the later years of the Marx Brothers movie career, Groucho started working on radio. He hosted several programs and was a guest on many shows. His biggest success was the comedy quiz show You Bet Your Life which started in 1947. The show later moved to television and was on the air until 1961.

Groucho also appeared in a few movies without his brothers.

Always being a liberal, Groucho sometimes made critical remarks about politics and had friends which were regarded as communist by the US of the 1950s. This let to Groucho being investigated by the FBI.

When Marx Brothers became popular again in the last sixties/early seventies Groucho made a comeback with a show in Carnegie Hall in 1972. At the film festival in Cannes in 1972, he was made Commandeur des Arts et Lettres and in 1974 he received a special Academy Award for the achievements of the Marx Brothers.

5 - How I Got Started In Show Business

12 - World War One, Vaudeville In Toronto

30 - Everybody Works But Father

32 - Margaret Dumont, The Dowager In Our Films

35 - Will Rogers, Baseball in Baltimore

Reviewer: BixLives - - April 10, 2020
Subject: ???
One of the reviewers said that Groucho "is a great dead guy!".
I am not part of the younger generation myself, but to all the youth out there, PUHLEEZE do NOT think this is a groovy way to say a great performer or literary figure is good.
The correct method for writing to express your admiration for dead writers and performers is in the PRESENT TENSE because their work will always be alive. —E.g. "Mark Twain's Huckleberry Finn remains America's greatest novel because...".

You see? Present tense. It is NOT appropriate to say that Groucho Marx is a "great dead guy"; although, I suspect Groucho would have found this funny. Alas, Groucho did a lot of professional writing and is considered a literary figure as much as he is considered a comedian.

Harpo was quite THE favourite amongst the top writers of the Algonquin Round Table, and Grouch would be accepted any day as an alternate. Some of my favourites are: Dorothy Parker, Alexander Woollcott, Irving Berlin, F.P.A (Franklin Pierce Adams)., Robert Benchley, George S. Kaufman, Deems Taylor, Herman J. Mankiewicz, etc. Basically, these are the premier artistic 'dead guys' of their generation.

The Marx Brothers did not have a traditional education beyond grammar school (3d or 5th grade). ALL of Minnie Marx's children attended The Broadway Stage University. —Perhaps the most exclusive school in the world, —far more difficult to gain admittance than Eton, Harvard, Harrows, Magdalen College, Trinity, etc. By the the early 1920s these 20-something lads were on top of the entertainment world. Not bad, after growing up without a traditional education in poverty.